Lord Hill’s Column, outside the Shirehall (Shropshire Council’s headquarters), is one of the most notable landmarks of the town of Shrewsbury, Shropshire, England.

The Column is the tallest Doric column in England, standing at 133 ft 6 in (40.7 m) high, and commemorates Rowland Hill, 1st Viscount Hill of Almaraz and Hawkstone, with a 17 ft (5.2 m) tall statue of Lord Hill standing on the top of the column.

Lord Hill was one of Viscount Wellington’s most trusted Generals and fought alongside Wellington in Spain, Portugal and France. From 1828, when Wellington had to relinquish the post of Commander-in-Chief of the British Army on becoming Prime Minister, Lord Hill succeeded him and held the post until 1842.

The column is worked from local Grinshill stone and the statue of Lord Hill is modelled in Coade stone. The first stone was laid on 27 December 1814 and the last on 18 June 1816 – the first anniversary of the Battle of Waterloo. The total cost was 5,972 pounds, 13 shillings and 2 pence (approx. £202,831.48 at current prices). 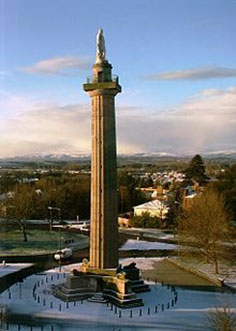 The column has been listed by English Heritage as a Grade II* structure.

If you enjoy reading the account of the man whose statue stands at the top of Shropshire’s column, please help to have a new statue made in coade artificial stone – a very hard-wearing medium – so that his achievements and his character can continue to be appreciated by Shropshire people and all who visit their beautiful county. Why not become a Friend for a Fiver  of Lord Hill’s Column and have a hand in saving it!